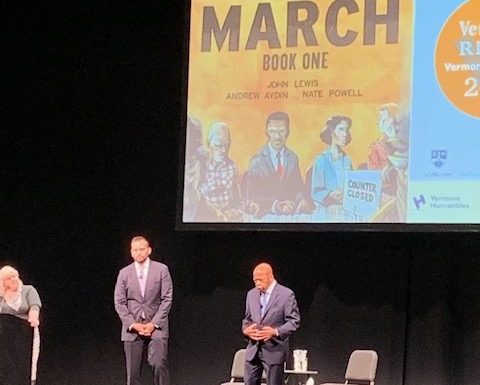 “We didn’t want to shy away. We didn’t want to hide anything or sweep something under the rug or in some dark corner. It’s real. We used the N-word. We had some discussion about it, but it was important to make it plain, to say what happened, describe it.” – John Lewis 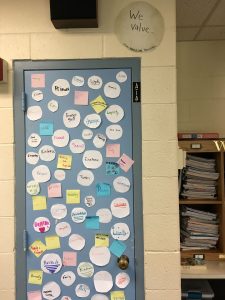 Getting Ready for John Lewis Slideshow

“As we approached this work, we wanted to be as sensitive as possible to our students’ needs and also be willing to dare enough in our practice to make mistakes and then fix them super quick.  I think we have been trying to listen really closely.”

“We held four circles today on my team, and likewise had fruitful conversations – many students reported that they felt uncomfortable, but glad we had this discussion. I also noticed a lot of voices that don’t usually share in circles stepping up and presenting thoughtful, sometimes challenging ideas. I was very excited to hear their perspectives added to this mix and heartened to hear them connect with this discussion. “

“The students discussed reading the n-slur, which morphed into talking about use of the n-slur at all, including amongst themselves. Kids felt all different ways about this word and its use. Some thought it should never be used. Others thought it was appropriate in a context like the John Lewis book. Others thought it was okay within the black community. There was no consensus on this subject.”

“One thing that came up in my first class is that one of my students of color wrote on her exit slip that she felt uncomfortable because she felt everyone was looking to her for what to do.”

“They discussed that when subjects of race come up, “all heads are turning” toward them and that this feels uncomfortable. One student said that sometimes it felt like people were trying to “stare into your soul.” A student also remarked, “I don’t know why they stare at us. It’s the white people who should get stared at. They are the ones that did it (the enslaving).” 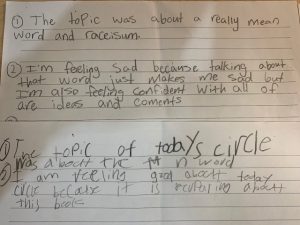 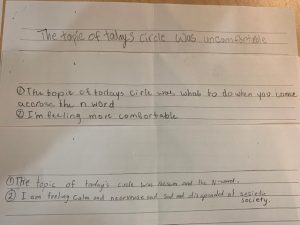