Bullying, Hazing, and Harassment are taken seriously in the Burlington School District. Complaints of suspected bullying, hazing, and harassment should be reported to the Designated Employees at each school, who will investigate such complaints. Click here or on the image below to find the name and contact information for your school’s Designated Employee. 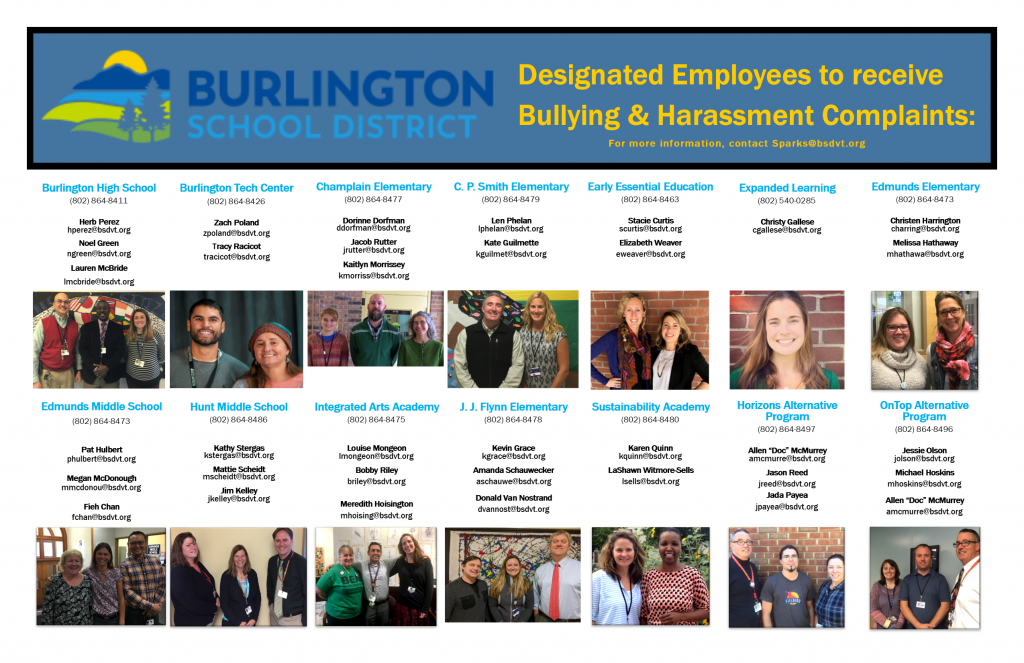 In the beginning of the 2015-2016 school year, the State of Vermont made changes to its bullying, hazing and harassment policies. In previous years there were three separate policies: one for bullying, one for hazing and one for harassment. Currently, there is one policy that covers bullying, hazing, and harassment. The new policy is also accompanied by a complete set of implementation procedures. The Burlington School District strives to foster a safe learning environment where all students and school staff display respectful behavior towards each other.

Bullying in any form is not tolerated. Specifically, bullying refers to behavior, including electronic, directed at a student from another student or group of students that is repeated over time, is intended to ridicule, humiliate, and/or intimidate the student and occurs during the school day on school property, on a school bus, before or after the school day, or at a school-sponsored activity. Procedures are in place at each school for handling bullying behavior, and parents are encouraged to talk with building administrators when they are concerned about bullying incidents.

Hazing refers to any act committed by a person (individually or with a group), on or off school property, against another student in connection with pledging, being initiated into, affiliating with, holding office in, or maintaining membership in any organization that is affiliated with the Burlington School District. Hazing activities are intended to humiliate, intimidate, and/or demean another student and will not be tolerated in the School District. Consent or acquiescence by the victim of the hazing does not excuse those who participated in the hazing. Hazing, soliciting, directing, aiding or attempting to aid in or assist another person in hazing or failing to take reasonable measures to prevent hazing is unlawful and a student may be subject to prosecution under the law and under the District’s Policy and a penalty up to $5,000. Hazing incidents may also be reported to law enforcement agencies.

Examples of hazing include:
1. Any type of physical brutalities such as whipping, beating, striking, branding, electrical shocks, placing a harmful substance on or in the body, or other similar activity.

2. Any type of physical activity such as sleep deprivation, exposure to the elements, confinement in a small space, or other activity that creates or results in an unreasonable risk of harm or that adversely affects the mental or physical health or safety of the student.

3. Any activity involving consumption of food, liquid, alcoholic beverage, liquor, drug, or other substance that subjects a student to risk of harm.

4. Any activity that induces, causes, or requires a student to perform a duty or task, which involves the commission of a crime or an act of hazing.

Complaints of suspected hazing should be reported to the Designated Employees at each school, who will investigate such complaints.

Harassment is a form of unlawful discrimination that will not be tolerated by the Burlington School District. The District will address all complaints of harassment promptly and take reasonable steps to end harassing conduct.

Prohibited harassment:
Cyber-Bullying or Cyber-Harassment
There is no specific statute pertaining to cyber-bullying or cyber-harassment. Rather, the Vermont statutes that define “harassment” and “bullying” have each been amended to expand their scope to include and cover behaviors that may happen off-campus/online, but only where the behavior can be shown to impact the student’s ability to access education. For example, Cyber-harassment is referred to here in the underlined text:

A. Harassment: is an incident or incidents of verbal, written, visual, or physical conduct, including any incident conducted by electronic means, based on or motivated by a student’s or a student’s family member’s actual or perceived race, creed, color, national origin, marital status, disability, sex, sexual orientation, gender identity or gender expression that has the purpose or effect of objectively and substantially undermining and detracting from or interfering with a student’s educational performance or access to school resources or creating an objectively intimidating, hostile, or offensive environment.

2. Racial Harassment: conduct directed at the characteristics of a student’s or a student’s family member’s actual or perceived race or color, and includes the use of epithets, stereotypes, racial slurs, comments, insults, derogatory remarks, gestures, threats, graffiti, display, or circulation of written or visual material, and taunts on manner of speech and negative references to racial customs.

3. Other Protected Categories of Harassment: conduct directed at the characteristics of a student’s or a student’s family member’s actual or perceived creed, religion, national origin, marital status, disability, sex, sexual orientation, gender identity, or gender expression; includes but is not limited to the use of epithets, stereotypes, slurs, comments, insults, derogatory remarks, gestures, threats, graffiti, display, or circulation of written or visual material, taunts on manner of speech or dress, and negative references to customs related to any of these protected categories.

a. Creed or Religious Harassment means harassment based on or motivated by a student’s or a student’s family member’s actual or perceived creed or religious beliefs or practices, including manner of dress.

b. National Origin Harassment means harassment based on or motivated by a student’s or a student’s family member’s actual or perceived national origin, including manner of dress.

c. Marital Status Harassment means harassment based on the status of being an unwed mother or father directed at, or motivated by a student’s or a student’s family member’s actual or perceived marital status.

d. Sexual Orientation Harassment means harassment based on or motivated by a student’s or a student’s family member’s actual or perceived sexual orientation.

f. Gender Expression Harassment means harassment based on or motivated by an individual’s or individual’s family member’s actual or perceived gender expression, including, but not limited to, appearance or behavior, regardless of the individual’s assigned sex at birth.

g. Disability Harassment means harassment based on manner of speech or movement, cognitive ability, receipt of educational services outside of the general education environment, or other manifestation of a person’s disability directed at, or motivated by a student’s or a student’s family member’s actual or perceived disabling mental or physical disability.

All students, parents/ guardians, school community members other than staff are encouraged to report incidents of misconduct or student harassment to a school employee or one of the two Designated Employees at your school/building. Any adult school employee who sees or hears, or receives a report either written or oral, of student harassment, the employee must immediately inform a Designated Employee.

Schools/buildings will post the names of their current Designated Employees at the beginning of each year. Contact Henri Sparks, Director of Equity and Safe/Inclusive Schools, with any questions via email or phone: (802) 865-4168.

Consequences: If an individual is found to have engaged in misconduct or harassment, he/she will receive education; training; discipline, up to and including suspension, expulsion or termination, banning from school property, or other consequences that are appropriate to the offense and that are designed to prevent future harassment.

Independent Review: A complainant may make a written request to the Superintendent for an independent review of the matter if the complainant (1) believes that the school did not correctly analyze the complaint and failed to conduct an investigation of the matter because the school believed the alleged conduct was not possible harassment, (2) is dissatisfied with the final determination made after the investigation as to whether harassment occurred, or (3) believes that although a final determination was made that harassment occurred, the school’s response was inadequate to correct the problem. The independent review shall be conducted by a neutral person in accordance with the Policy.

Retaliation: Retaliation against anyone who files a harassment complaint or cooperates in making or the investigation of a complaint is strictly prohibited, basis for separate discipline, and illegal pursuant to 9 V.S.A. 4503(a).

Privacy: Complaints, and any resulting consequences, will be confidential as permitted by investigative needs, duty to act on certain results, compliance with Public Record Requests, and consistent with the Family Education Rights Privacy Act.

Prohibition of Discrimination and or Harassment of Employees and Others: In summary, discrimination and or harassment of an employee or other person protected by the laws listed below and Board Policies, on the basis of any of the following characteristics of his or her race, national origin, color, creed, religion, age, sex (including but not limited to sexual harassment, pregnancy, parental status), disability, sexual orientation, gender identity, gender expression, ancestry, marital status, place of birth, or political affiliation is a form of unlawful discrimination and is prohibited by School District Policies and as provided for in Title V, Section B, 504 of the Rehabilitation Act of 1973, 29 U.S.C. § 794, et seq.; Title VI of the Civil Rights Act of 1964, 42 U.S.C. § 2000d, et seq.; Title VII of the Civil Rights Act of 1964, 42 U.S.C. § 2000e, et seq.; Title IX of the Education Amendments of 1972, 20 U.S.C. § 1681, et seq.; The Age Discrimination Act of 1975, 29 U.S.C. § 623, et seq.; The Americans With Disabilities Act of 1990, 42 U.S.C. § 12101, et seq.; and Fair Employment Practices, 21 V.S.A. Chpt. 5, subchpt. 6; Public Accommodations, 9 V.S.A. §§ 4500 et seq. all as they may be amended.