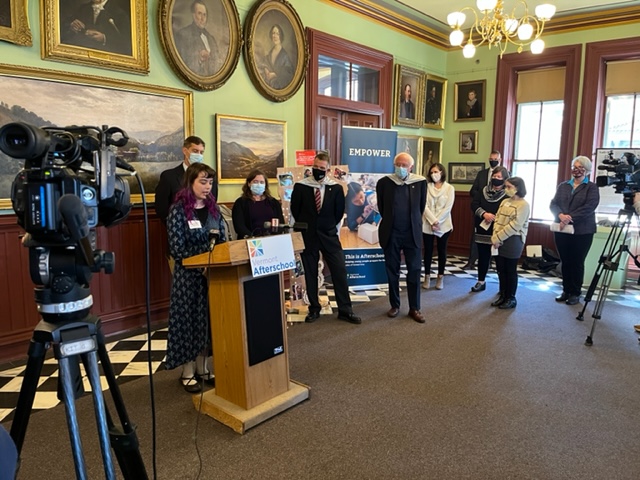 On October 29, Afterschool program advocates traveled to Montpelier for a press conference highlighting expanded afterschool opportunities for Vermont students. Among them was Avelina (Lina) Zirkle, a Horizons and BTC student who has been working as a youth advisor to Vermont Afterschool.

Zirkle spoke at the press conference advocating for expanding afterschool opportunities for all students, and especially students and families lacking financial means. In her speech, she highlighted her experiences participating in afterschool activities at the Integrated Arts Academy and the Boys and Girls Club. She also highlighted working in BSD’s Afterschool program at Flynn Elementary as a junior in high school.

Both Governor Phil Scott and Senator Bernie Sanders were at the event expressing their support for expanded opportunities. Governor Scott complimented Lina on her speech (a well-deserved recognition!) and she was mentioned in Vermont Business Magazine’s coverage of the event. Great job Lina!!!